A University of Lagos (UNILAG) Post-UTME candidate took to Instagram to narrate a sad incident that occurred while on his way for university’s test.

17-year-old @farookieboss alleged that the Taxify driver identified as Emmanuel diverted the trip and took him and his brother to SARS operatives for extortion. According to him, they were left with bruises after being assaulted by the alleged SARS operatives who accused them of being yahoo boys before emptying their account.

So people this is the height it has got too am just a 17 year old boy who works for my aunt at her shop and earn a salary of 25k per month so i was trying to get too unilag to go write my post utme exams on my way i ordered this taxify rider to take me to where i was going to so first of all i noticed this man had come with a different car but this wasnt the first time.

I had experienced a driver changing car so i really didnt mind then he started the trip before i got there which he claimed was a mistake so on our way i dont know how ogudu connects to unilag this man was moving slowly then unexpectedly a vechile blocked us with men inside claiming to be sarz which didnt wear any uniforms at all and previously this man had beeen speaking to someone that he is close that they should wait for him there which i believe were this Sarz men so they stopped us and demanded we Alighted from the car and packed us inside a bus they spoke with the taxify guy in his car then drove away and the man went his way.

They took us to a very unknown location and claimed we were yahoo boys all because my brother could afford a Samsung Note 8 for me is it a crime to use a big phone am just a young boy working honestly lastly they emptied ma account which had 20k in it this is totally not fair at all that money would have done alot for me i demand justice and the funny part is that taxify claims they cant provide the driver this is pure bullshit his name is Emmanuel, i write this in tears this is totally wrong we got beaten to the core by this men we just young boys all our body are bruised right now we were 3 boys 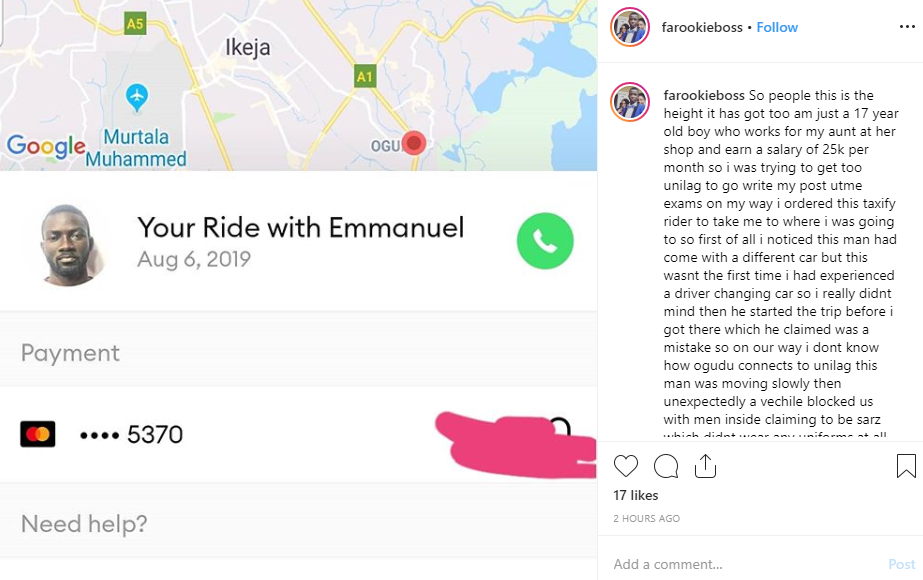