A Twitter user has narrated her encounter with a woman who was forced to become a bus driver after her husband died, leaving her to cater for their 4 sons alone. She also narrated how the woman was getting bullied by male drivers and area boys.

@EfikIbi revealed that the female commercial bus driver said the bus she now drives to make ends meet belonged to her husband. After his death, she had no way to provide for her kids so she went to a driving school with money gathered from her husband’s burial.

Ibi wrote: “Guys! My bus driver is a woman!! These nonsense men are now refusing to load for her. One said ‘madam night don come. Go give your husband food.’ Update: I am now loader/conductor! This bus must full tonight.”

She added: “Bus was full!! I loaded complete! I should probably start looking at a different career path. And oh, her name is Madam Cele. Short for Celestine. We talked all the way from Airforce junction to Oilmill. Plot twist, her husband is dead! Left her with 4 boys. Bus was his own.” 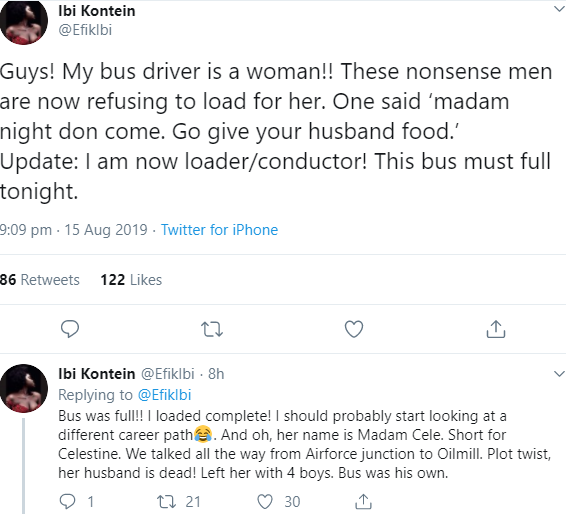 She later gave an update, writing: “She took some money from his burial money and went to driving school, then picked up from where he had left off. She doesn’t have a phone so I gave her my number. Anytime I see her again, I’m paying for everybody’s seat. Thunder fire stereotypical misogynistic cowards!” 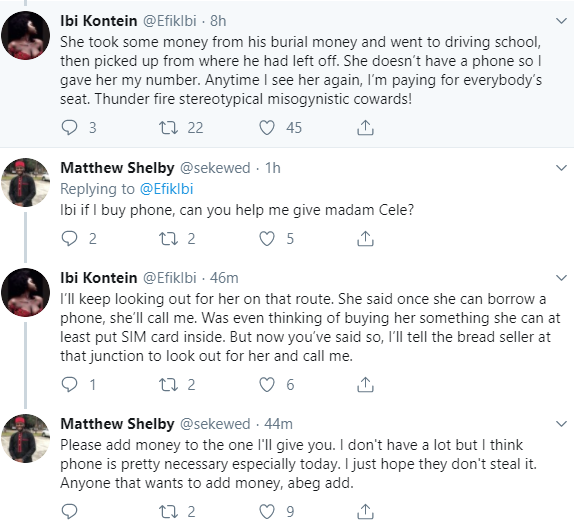 #SoCynthiaMorganLied is trending on Twitter after Jude Okoye released copies of their contract which...

Burna Boy shades Davido ahead of his album release

Unknown Persons dig out body of an old man buried 2 weeks ago, display...

It will take a miracle for Coronavirus to disappear- Pastor Adeboye