Operatives of the Economic and Financial Crimes Commission (EFCC) are currently raiding the residence of Akinwumi Ambode, the immediate past governor of Lagos state. 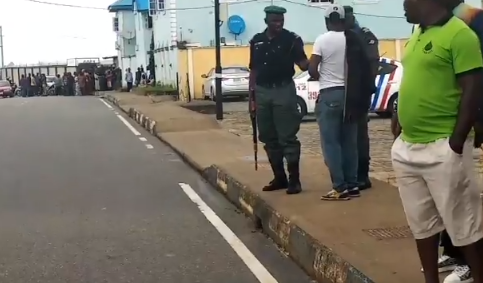 The antigraft agents stormed Ambode’s Epe residence at about 9 am and are currently carrying out a search of the house. Tony Orilade, EFCC spokesman, confirmed this to TheCable.

The search comes a few weeks after the EFCC secured an order to freeze three bank accounts said to belong to the Lagos State Government over an alleged fraud of N9.9 billion. The three bank accounts, domiciled in First City Monument Bank, Access Bank, and Zenith Bank, are numbered 5617984012, 0060949275 and 1011691254, respectively and were opened during the Ambode administration.

The EFCC had approached the court for an order for the accounts to be frozen pending the conclusion of the investigation and possible prosecution of the Permanent Secretary in the Office of the Chief of Staff to Ambode, Adewale Adesanya. According to an ex-parte application, a member of the EFCC investigating team, Kungmi Daniel, said the commission discovered “a huge inflow of N9,927,714,443.29” from the state accounts into an FCMB bank account opened on September 17, 2018, during Ambode’s administration.

The governor has since denied claims that the accounts are linked to him.

[VIDEO] Incredible moment Iranian students refuse to step on US and Israeli flags amid...

John Legend pays a visit to Nigeria and Chrissy Teigen says she wants to...

Nigerian man shot dead outside his apartment complex in California