Etinosa has fired back at Oyemykke after his Instagram post in which he called her an apologetic nudist and someone so low, over her comment on an Ad he featured in.

It was reported that the UK-based Instagram celebrity came down hard on Etinosa over her comment of “not dating him because he shouts too much”.

Etinosa who served a response to Oyemykke’s outburst on Instagram, insisted that what she said was her opinion and she will stand by it. The actress added that she is not a pretender and also told the motivational speaker to work on himself and stop spitting on people.

She wrote “To whom it may concern. I no be Mami water wey dey fear bouncer. Look me well
I NO BE TUNDEEDNUT!!!!” 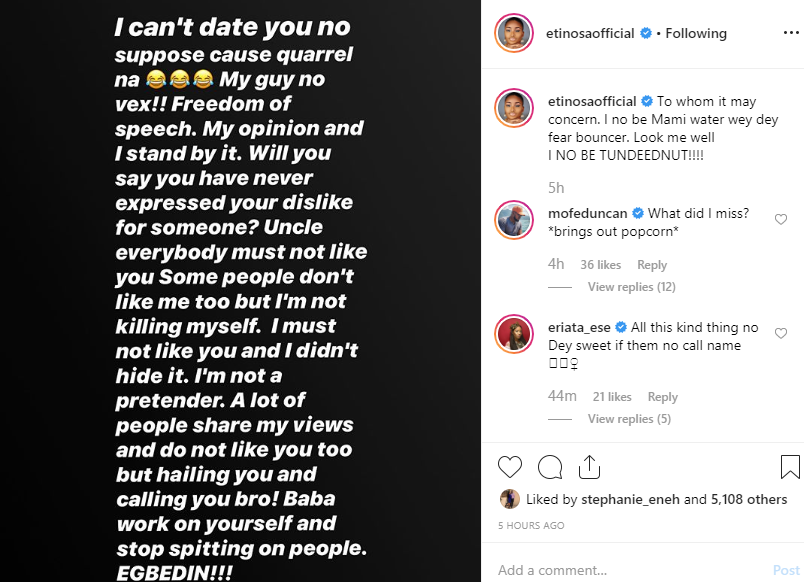 Just few minutes ago Etinosa blasts Oyemykke again calling him a jobless empty Egbedin (drum in Edo language) who is a house boy to a white woman in London, she insinuates he married the lady to obtain his green card.

Watch her video below;

Good morning oo Oyemyke has replied me. I just read it and all I could notice was, even when he's typing he's still shouting 🤣🤣🤣🤣🤣🤣🤣 I can see he's looking for a platform to desperately blow I will not post him here. The jobless empty EGBEDIN who is house boy to a white woman in London for Green card has to pay me for advert. OZUOR 🤣🤣🤣🤣 My best verse in the Family song🙈🙈 . SONG Family by @jaywonjuwonlo Verse by @savefame

It is unfounded and baseless – AGF Abubakar Malami reacts to report that the...

[VIDEO] It is not a crime to bleach or do cosmetic surgery – Etinosa...

When my husband proposed, I told him I’m lazy and hate house chores –...